Facebook-square Instagram
Menu
Menu
What Is a Tongue Tie?

Although we’re not sure about the exact numbers, it’s estimated that about 10% of babies in the US are born with a tongue tie. For new parents, and even adults or older children who may not have realized they had a tongue tie, you may have a lot of questions. What is a tongue tie? How can it affect your baby? Can it be fixed? Read on to find out!

What Is a Tongue Tie?

If you lift up your tongue and take a look in the mirror, you’ll see a thin band of tissue that runs along the underside of your tongue and attaches it to the floor of your mouth. You can find similar bands of tissue connecting your lips and cheeks to your gums in a few places. The most obvious example of this connects your top lip to the gums above your two front teeth.

The connective tissue under your tongue is called a lingual frenum. Everyone has one, but no two are exactly alike. For some people, it’s a very thin, stretchy membrane that is barely visible. In others it can be a thick band. Most people have a lingual frenum that is long enough and attached far enough toward the back of their tongue that it does not interfere with moving their tongue at all.

For about 10% of people, that connection may be too tight, preventing them from lifting their tongue to the roof of their mouth. Or, it might go too far toward the tip of the tongue, meaning they can’t stick their tongue out. This is called a tongue tie.

Can a Tongue Tie Cause Problems?

Any of the frena (those connective membranes under the tongue and inside the lips) may be too short, poorly placed, or too thick to allow for normal function. However, a tongue tie will usually cause more serious issues than a lip tie.

A Tongue Tie Can Prevent Babies from Nursing Well

Many times, the first sign there is a problem with a tongue tie will become obvious when a baby tries to nurse. For babies with tongue and lip ties, it can be difficult to position their mouth properly. It may also be impossible to create appropriate suction for nursing or make nursing very painful for the mother. In extreme cases, it can even prevent a baby from gaining weight appropriately and pose a serious health risk. Your baby’s pediatrician may recommend releasing this tongue tie in infancy.

If the tongue tie is not released in infancy, a child might develop a speech impediment as they learn to talk. Because their tongue does not have the usual range of motion, they may have trouble with certain letters. The sounds L, R, T, D, Z, S, and TH are usually affected the most.

A Short Lingual Frenum May Affect Breathing and Airway

Because the tongue cannot take its ideal position at the roof of the mouth when the mouth is at rest, people with a short lingual frenum are at higher risk for breathing issues. Tongue tie may affect the shape of the roof of the mouth. This can compromise the proper development of the airway. A malformed palate can cause the upper airway to collapse during sleep, a condition known as sleep apnea, which can cause other severe health problems. Good sleep is essential for cardiovascular health and success at school!

Tight Frena Can Cause Teeth to Shift

Any of these bands of tissue—whether under the tongue or inside the lips or cheeks—can cause the teeth to shift or prevent them from erupting in their proper positions. The lip frenum we discussed earlier, inside the upper lip, can cause a gap between the two front teeth. If this frenum is not released during or just after orthodontic treatment, it is very likely that gap will return over time.

Similarly, a tongue tie can pull on the gums behind the lower teeth. This can cause severe recession and periodontal problems and cause the teeth to shift. Left untreated, this can lead to problems with the bite and even tooth loss.

How Does a Dentist Fix a Tongue Tie?

In some cases, your pediatrician might recommend clipping the tongue tie in the hospital shortly after birth. This is usually done with sterile scissors and without numbing the area. It should not require stitches and usually heals relatively quickly.

However, dentists are also well versed in releasing tongue and lip ties when necessary. In fact, Dr. Dunn and the team of doctors here at Lake Baldwin Dental are proud to offer the most up-to-date methods for releasing lip and tongue ties.

If you haven’t already heard about it, the Solea CO2 laser in our office can perform soft tissue releases with less discomfort and much faster healing than any old-fashioned surgery. Performing the procedure with a laser instead of a blade can be completed in just seconds. Because it seals the wound as it releases the tissue, healing time is minimized. In fact, there usually isn’t any bleeding at all!

Check Out Some Amazing Results!

Below, you can see a few photos of a great tongue tie release Dr. Dunn performed recently. This patient’s frenum ran all the way to the tip of his tongue and severely limited his range of motion. As a baby, he was able to nurse well enough that he didn’t need it treated right away. However, it turned out to be a possible cause behind his sleep difficulties as a baby and through toddlerhood and started to cause a speech challenge as he grew.

These after pictures were taken just seconds after the procedure! As you can see, there was no bleeding at all. While he complained of slight tenderness that afternoon, he could eat normally the next day and his parents are thrilled with the results. He’s been sleeping better, waking with more energy, and he can even roll his Rs now!

If you or your child has a tongue or lip tie, call our office today to talk about your options for a quick and painless release with Solea. Keep smiling, Orlando! 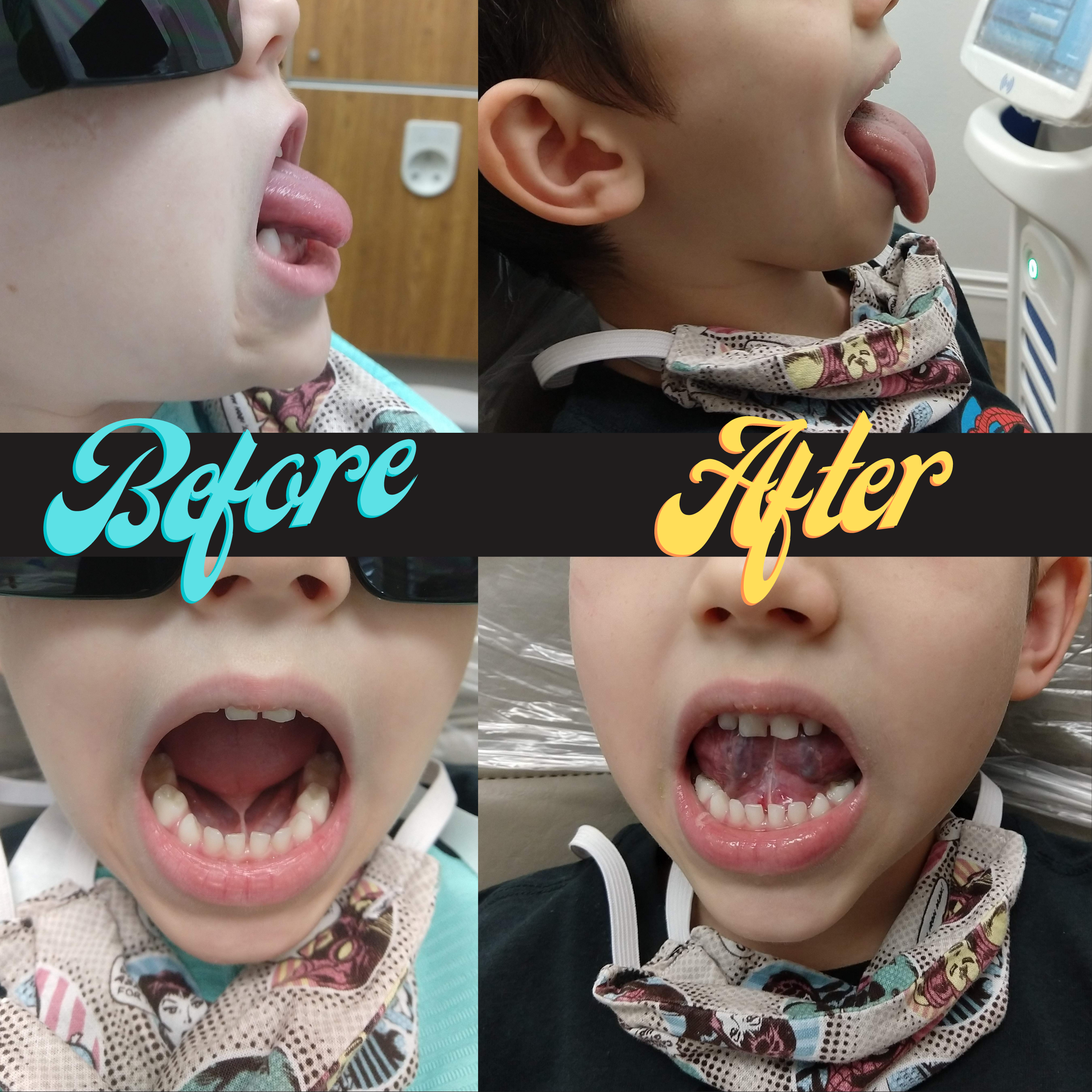