We recently posted a blog about the link between missing teeth and cognitive problems later in life. That post emphasized the importance of maintaining oral health to prevent losing teeth. But what about those of us who were born lacking? For those missing teeth due to genetics, we have a few options now and new treatments on the horizon!

It’s estimated that anywhere from 3 to 10% of the US population has a genetic condition where they do not develop the usual 32 adult teeth. And this figure does not include people who do not develop wisdom teeth, meaning that figure is actually much higher! Your humble office blogger is missing a whopping seven adult teeth due to this genetic condition, which is a weird situation for a dental hygienist.

The most commonly missing teeth due to genetic missing teeth, called congenital anodontia or agenesis, are the upper lateral incisors. Those are the ones immediately next to the two front teeth. Next most common are the middle two teeth on the lower jaw, followed closely by the premolars, which are those small ones between the canines and the molars.

How Do We Usually Treat Genetically Missing Teeth?

The process of adding a tooth where your body never produced one is a bit more involved than replacing a lost tooth in most cases. After all, if you had a tooth in that position in the past, your jaw likely has the space and the bone structure to support a replacement.

Sometimes, we will try to keep the baby tooth in place as long as possible to delay the need for a replacement. However, this is usually not a permanent solution (pun intended). Baby teeth just aren’t meant to last that long, and generally can’t hold up for the long haul. And that’s also assuming the baby tooth did grow in. In many cases, the baby tooth may also be missing to begin with.

Unfortunately for those of us with genetically missing teeth, we will need to create that space and support before we can add a tooth. That usually means a fairly lengthy orthodontic process to space the teeth out appropriately. The good news is that orthodontists can usually put a little fake tooth on our braces to fill in that space for better aesthetics while we are waiting for a more permanent solution.

Once we have enough space, we may need to build better support. Because the crest of bone in that area never needed to accommodate a tooth previously, it may not be thick enough to support an implant. That may mean bone grafts or sinus lifts will be needed.

This may all sound intimidating, but it is well worth it to get a full set of pearly whites. As discussed in that previous blog, each additional usable chewing surface is key for protecting the other teeth and preventing other problems. While other types of replacement, such as bridges, are possible, implants are typically the best we have to offer.

The Future of Treatment for Genetically Missing Teeth

You may or may not be aware, but researchers in Japan are usually on the absolute cutting edge of dental science. In keeping with their history of amazing leaps forward, scientists at Kyoto University and the University of Fukui have launched an exciting new branch of study with some really promising initial results.

On the other end of the spectrum from congenital anodontia (missing teeth) is congenital hyperdontia, which is growing too many teeth. By studying individuals with too many teeth, researchers in the past were able to isolate the molecules that stimulate the development of teeth. Following this line of inquiry lead the new study to focus on the gene USAG-1, which seems to suppress the development of new teeth.

With all the COVID news lately, you may have heard of monoclonal antibodies. Monoclonal antibodies have been used to treat cancer and arthritis and develop vaccines. This new study is the first to show that monoclonal antibodies can benefit tooth regeneration. So far, these results have only been shown with ferrets, which have similar dental patterns to humans. The next step is to try this therapy on larger animals, working toward human trials.

What does this mean? Well, some time in the maybe not-too-distant future, if your family carries the gene for missing teeth, you may not have to undergo multiple surgeries for artificial tooth replacements! It may become possible to use drug therapy to stimulate your body to produce its very own replacement tooth.

While this technology is still a long way from becoming usable in humans, it is a very exciting step. Dental technology always strives to get as close as possible to duplicating what is natural to your body. That means using materials that are what’s called biocompatible. That means the materials won’t irritate your tissues and your body will accept them. And what could be more acceptable than your own tissues? The future of dentistry looks bright, so keep smiling, Orlando! 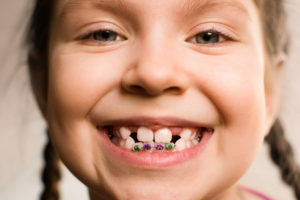